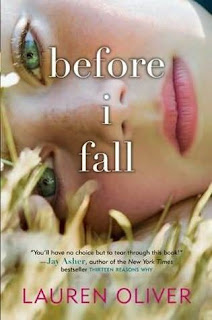 Before I Fall
By: Lauren Oliver
www.laurenoliverbooks.com
What if you only had one day to live? What would you do? Who would you kiss? And how far would you go to save your own life?

Instead, it turns out to be her last. Then she gets a second chance. Seven chances, in fact. Reliving her last day during one miraculous week, she will untangle the mystery surrounding her death—and discover the true value of everything she is in danger of losing. (from laurenoliverbooks.com)
****************************
Okay- so I love this book. LOVE. The beauty of this book is that in the beginning you hate Sam. You remember girls who were like her in high school, heck, maybe you even were her in high school. You see the mean girl tactics her and her friends Lindsay, Elody and Ally employ as they reign supreme over Thomas Jefferson High. You wince as they pick on those around them and act as if the rules (and the law) doesn't apply to them, and maybe you even think to yourself as you relize they are about die "well, they weren't nice people, maybe they deserved it".
Then, Sam's day begins all over again. Seven times it begins again and slowly you see her become something more. You see her realize who and what she has become and you watch as she tries to change it, tries to save her own life, to save more then just her own life. Seven days until she is at peace with her place in the world and how her life will go. It's really a fascinating journey. It leaves you thinking about what you would do, what you might change, who you might have spoken to more, or been nicer to, or even who you realize now was not worth your time (like Sam's boyfriend).
There are a few things I want to point out that I really appreciated. The biggest one being what Sam decides about her friends. They are mean (especially Lindsay) and it would be easy to throw them away in the quest to become a better person, but Sam doesn't. Sure one day she lashes out, but she realizes that no matter how they act sometimes, they are still her friends, and that sometimes that cruelty and anger is a mask for fear and insecurity. They were part of the same accident that takes Sam's life, and in the end Sam realizes that she can not only try to save herself, but save them all.
I also loved the charecter of Kent, Sam's childhood friend who has been pining away for her for years, waiting for that moment when she will see him for who he is, when he can mean something to her again . It doesn't happen right away, but by the end of the 7th day Sam has her eyes wide open and has realized what it is she has to lose and what she can do to save it all.
If I had to say something bad about this book, it would be that it is nearly impossible to read without at least a cursory thought about the movie Groundhogs Day. In fact a was a little worried when I realized that was where the story was going, but my fears were quickly lost as I got more and more engrossed in the story and Sam's fate.
Bottom line- excellent book. One of the best I've read in awhile. Go buy it, borrow it from a friend of get it from the library- just go read it.
******************************
I'm going to go ahead and plug the author chat and contest that is coming up on this book next week. We are chatting with Lauren Oliver over at Eve's Fan Garden on April 13th at 9:00 pm and that chat you have a chance to win an autographed copy of Before I Fall.
Posted by Kate E. at 1:55 PM