My Ramblings on And We Stay by Jenny Hubbard 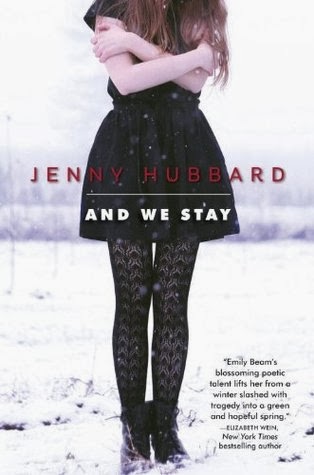 Summary:
When high school senior Paul Wagoner walks into his school library with a stolen gun, he threatens his girlfriend Emily Beam, then takes his own life. In the wake of the tragedy, an angry and guilt-ridden Emily is shipped off to boarding school in Amherst, Massachusetts, where she encounters a ghostly presence who shares her name. The spirit of Emily Dickinson and two quirky girls offer helping hands, but it is up to Emily to heal her own damaged self.

This inventive story, told in verse and in prose, paints the aftermath of tragedy as a landscape where there is good behind the bad, hope inside the despair, and springtime under the snow. (from NetGalley)


My Ramblings:
This is an odd one for me. For the bulk of the book I really enjoyed it. I liked how Hubbard spun the story, alternating back and forth between Emily's life now, at boarding school, and the events that led up to her boyfriend Paul committing suicide in the school library a few month before. It was a great way to piece the story together, since you for more and more information about why Emily was the way she was and what secrets she was hiding.

The other story thread, which dealt with Emily Dickinson and how her poetry and presence helps Emily heal was also really interesting. As Emily begins to heal, she connects to Dickinson and also begins to write her own poetry. I loved that Hubbard included Emily's poetry in the pages, it was one more way to connect Emily's feelings with what she going through. Which was a lot, and none of it was something that should be easy to deal with, so having her find an outlet though poetry was wonderful.

Which brings me to some of the things I struggled with. Without giving too much away, her boyfriend committing suicide is only one bit of the puzzle. Emily is dealing with her role in leading him to that point, and the fall out of what happens after. The secondary characters, Paul, Emily's parents, her Aunt Cindy and even to a lesser extent her new room mate aren't fully formed, and there are some behaviors that are alluded too and thrown away that really could have been explored more.

Stop reading now if you don't want any spoilers on this book. One thing that bothered me greatly was the story line that Emily was pregnant. Her boyfriend is supportive, happy even, and willing to do whatever it takes. Emily is torn on what she wants to do, but she isn't immediately looking for an out. Then her parents choose for her. She is to break up with Paul, they will travel to her Aunt's house in Boston and Emily will have an abortion. And that's it. Decision made. Emily breaks up with Paul and he begins to crack. He self injures, he gets desperate, and he begins to fall apart. This happens over a matter of days, and suddenly Paul is in the library with a gun, desperate for Emily to listen to him, to keep the baby and stay together. This is told in flashback style, and we aren't given a lot, except for everyone thinks that Paul never intended to hurt anyone, but when his back was against the wall he chooses to shoot himself. On her way to the abortion clinic Emily changes her mind, she doesn't want to go through with it, but her mother and Aunt don't let her back out. Prior to this point in the story I felt for Emily and Paul, they were caught in a tough spot and the consequences of their actions were difficult. After this point I didn't feel sympathetic to anyone. Everyone seemed to be behaving pretty badly, and it seemed like everyone was moving on in a pretty quick manner. In a matter of months everyone is going on as if everything that happened is okay, that it's something they can get by, but the reality is that it should have really long lasting ramifications. Emily's parents are controlling and make decisions that don't even remotely take into consideration the feelings of their daughter, they just need to get rid of the baby before people know. Paul is desperate and uses self-harm to try and make Emily feel guilty and to make her stay with him. I think that we are supposed to see this as a reason that Emily needed to get out, a reason that breaking up with him is for the best, but instead it made me feel like Emily was cold and uncaring. Emily's room mate, while supportive, also seems to take all the things that happened in stride, as if it's no big thing.

And then... the book just ends. Emily tosses a flippant comment to some of the mean girls at school and it's over. We don't really see that Emily ends up okay. We don't see her really dealing with any of the issues. I found it really abrupt. I'd love for someone else who has read this one to give me their take.

In the end this was a good book. The first half was excellent, and then for me started to unravel. Still, I think it's worth giving a read, it deals with some hefty issues that should be looked at and talked about. I just wish that it had dug a little deeper.