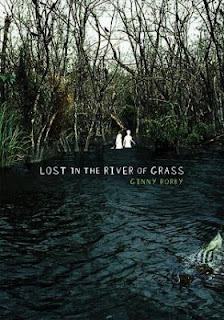 Lost in a River of Grass is in the tradition of survival stories like Hatchet or On My Side of the Mountain, where the young protagonist finds herself as she struggles to survive in an unforgiving wilderness. In this case, the setting is the Everglades, and Sarah, the 13-year-old narrator, sneaks away from an overnight school field trip for what was supposed to be a quick air boat ride with Andy, a boy who lives in the preserve. Naturally, disaster strikes and they're forced to walk out of the Everglades (they've got a knife, a small amount of Gatorade and some suspicious Spam). The author also skillfully layers in a story about overcoming prejudice. Sarah is black and Andy is the son of a Confederate-flag waving self-described redneck. (from goodreads.com)

This is a great book. I almost said "this is a great middle grade book" since I specifically picked this book up as I was looking for books for my library (6-8), but then I caught myself. It's a great book regardless of your age or grade. Sarah is the perfect center for this story about getting lost in the Everglades. She's smart and funny, but she's also a total outsider. The poor girl on scholarship at the fancy school- personally I liked that she was on an athletic scholarship (for swimming) instead of a financial one. It highlighted her strengths and still made it clear that she was outside the group.

The book starts with Sarah going on a field trip with her class into the Everglades. She's feeling left out and alone and skips a part of the field trip which is where the entire adventure really begins. Instead of sitting alone in her room she meets a boy named Andy who is just as alone as she is and together they decide to have some fun and go on an air boat ride. When the boat sinks they are forced to face their fears, lean on each other and find their way home.

Interwoven into the lost in the wilderness story is also a story about overcoming prejudice and stereotypes. Sarah is black and Andy's father is an ex-con who doesn't hide his hatred for anyone who isn't just like him. In the end Sarah and Andy don't just save each other, but they teach everyone around them about accepting people for who they are.
Posted by Kate E. at 12:26 PM