My Ramblings on The Ice Dragon by George RR Martin 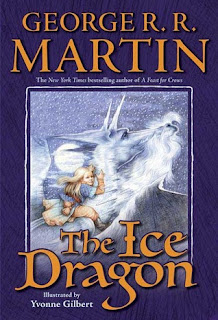 The ice dragon was a creature of legend and fear, for no man had ever tamed one. When it flew overhead, it left in its wake desolate cold and frozen land. But Adara was not afraid. For Adara was a winter child, born during the worst freeze that anyone, even the Old Ones, could remember.

Adara could not remember the first time she had seen the ice dragon. It seemed that it had always been in her life, glimpsed from afar as she played in the frigid snow long after the other children had fled the cold. In her fourth year she touched it, and in her fifth year she rode upon its broad, chilled back for the first time. Then, in her seventh year, on a calm summer day, fiery dragons from the North swooped down upon the peaceful farm that was Adara's home. And only a winter child--and the ice dragon who loved her--could save her world from utter destruction.

The Ice Dragon marks the highly anticipated children's book debut of George R.R. Martin, the award-winning author of the New York Times best-selling series A Song of Ice and Fire and is set in the same world. Illustrated with lush, exquisitely detailed pencil drawings by acclaimed artist Yvonne Gilbert, The Ice Dragon is an unforgettable tale of courage, love, and sacrifice by one of the most honored fantasists of all time. (from Goodreads.com)

My Ramblings:
This was a really cute book... which is something I never thought I would say about a book by Martin. For the last year I've been slowly working my way through his Song of Ice and Fire series, and enjoying the HBO series that is based on it, Game of Thrones. These books are thrilling, hefty and occasionally so vivid that it's hard to read. Cute is a term that has never come up. So when I saw this book on the shelf of the Elementary Library I'm working at I was a bit taken aback. George RR Martin for the 3-5 set?

It was good. At just 107 pages it's a quick read and a great introduction to fantasy for younger readers. The plot is simple and straightforward. A young girl, Adara, feels like she's never fit in. She's a child of the winter and snow and she enjoys the colder months much more then her family. She also has the ability to ride the Ice Dragon, something no one has ever really dreamed of. When war comes to her village, sweeping down from the north, Adara takes her chance, first to escape and then to be the hero and come to the rescue of the family she never really fit into.

It's no Game of Thrones, but it's a fun read that packs in quite a bit of fantasy and adventure!
Posted by Kate E. at 9:13 AM