My Ramblings on The Fourth Stall Part II by Chris Rylander 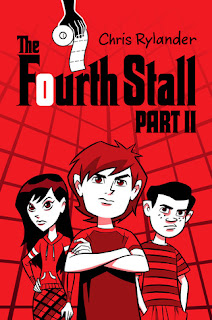 
The tween-noir saga continues. The life of crime is good. Mac has taken down legendary high school crime boss Staples, business has been booming and Mac and Vince are getting ready for middle school baseball tryouts. But this can't last. Mac has always tried to keep his friends close and his enemies closer. But what happens when you can't tell the difference?
A dilemma walks into the fourth stall in the form of Trixie Von Parkway - an eighth grader with a mean look and an even meaner predicament. Seems that the new science teacher is terrorizing her, and she needs Mac to get him off her back. Sounds simple enough, but as Mac starts to dig deeper, he finds even more trouble brewing at his school, including a new administrator bent on destroying his business and indicating that Trixie isn't who she claims to be. The worst that could have happened to Mac before was that he might lose a little money, maybe catch a beating. In THE FOURTH STALL PART II, though, the stakes are even higher than that (from Goodreads)
My Ramblings:
So first I have to say that this book, and the first book in the series, are two of the funniest books I've ever read. I found myself laughing out loud several times as I read Part II (and getting some very funny looks from the people around me).
This book picks up pretty much where the first book left off, with a girl walking into the fourth stall and sending Mac's world spinning. Who is she really? What exactly does she want? Why do middle school girls have to be so darn confusing!? I'm not going to answer any of those questions for you, you'll have to pick the book up in February to find out. I will tell you that Rylander does a brilliant job at keeping you guessing at who the good guys are and who the bad guys are. I was pretty sure I knew the score, but I was totally wrong!
What I really like about these books is that Rylander doesn't dumb down the kids or the experiences they have. He acknowledges that kids have these whole worlds that we adults may not be privy too. In this case we see Mac continuing picking up his business as usual as he helps other students fix their problems. The problems the kids have are all very realistic. The last story dealt primarily with bullies (review here) and this one deals with state tests and the pressure they put on kids and teachers alike. Everyone is coming to Mac for help with the test and then there is the additional problem of a new administrator who is cracking down of shenanigans and a new teachers who may be the coolest teacher/coach ever or he might be the devil himself. The methods Mac employs aren't always on the up and up, and I sometimes shake my head that these kids would get away with it at all, but the way Rylander writes it allows for the reader to just go along for the ride, enjoying all the twists and turns as they go. It was also great to revisit some of the characters from the first book, especially the school bullies, who are both the bad guys (because they are bullies), but also the good guys (because they work for Mac).
I don't want to give anything away, so I will just say, take the next few months to go pick up The Fourth Stall so that come February 7th you are all ready for Part II!
Posted by Kate E. at 8:13 PM