My Ramblings on Unearthly by Cynthia Hand 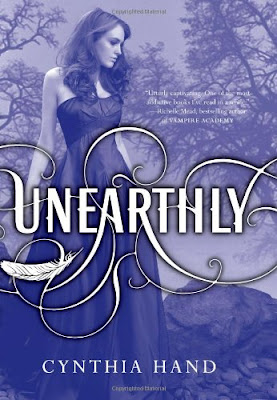 Summary: In the beginning, there's a boy standing in the trees . . . .

Clara Gardner has recently learned that she's part angel. Having angel blood run through her veins not only makes her smarter, stronger, and faster than humans (a word, she realizes, that no longer applies to her), but it means she has a purpose, something she was put on this earth to do. Figuring out what that is, though, isn't easy.

Her visions of a raging forest fire and an alluring stranger lead her to a new school in a new town. When she meets Christian, who turns out to be the boy of her dreams (literally), everything seems to fall into place—and out of place at the same time. Because there's another guy, Tucker, who appeals to Clara's less angelic side.

As Clara tries to find her way in a world she no longer understands, she encounters unseen dangers and choices she never thought she'd have to make—between honesty and deceit, love and duty, good and evil. When the fire from her vision finally ignites, will Clara be ready to face her destiny?

Unearthly is a moving tale of love and fate, and the struggle between following the rules and following your heart.
My Ramblings:
So, fair warning, this post is going to go slightly off topic. I won't be able to help myself, so beware. Let's get to it.
This book was wonderful, I'd put it at the top of my list for 2011 so far. And to think, I almost didn't read it. It came in from the library, got pushed aside when it was time for finals and suddenly my three weeks was up and it was time for Unearthly to go back. Luckily at the last minute I renewed and at last I began to read.
In theory, this is a pretty simple storyline. Girl, Clara, discovers she is something other, something special (in this case an Angel). Her mother, who is also an angel, doesn't tell her everything she knows, so Clara feels a bit lost, but determined to fulfill her purpose. Her visions bring her ever closer to solving the puzzle of what she is meant to do with her abilities. What I really liked about Clara was that even though she was clueless about alot of her powers and the history of angels, she was not ever a damsel in distress. She was confident and independent and unique but without being the outsider. She has great friends and her family is fairly well adjusted. For all intents and purposes, she is the everygirl. She crushes on the hot guy (Christian) and falls for the good guy (Tucker), and even though she becomes the silly-girl in love for a bit (didn't we all at one point, that's what first loves do), she never loses herself to it. When it's time to chose to follow her visions or her heart, she hesitates, but in the ends makes the decision on her own and is ready for the consequences of that choice. It's really well done.
The boys and Clara's friends in this book are great as well. On the friend side we have Wendy who is a normal Wyoming girl, rides horses and wants to be a vet and then we have Angela, a emo girl who knows more then Clara about the world of angels. Both girls are loyal friends who stick with Clara through thick and thin. These are the kind of friends we all want, and that someone like Clara needs. As for the boys, well, without a doubt I'm a Tucker fan. He's Wendy's twin, hard working, and a real cowboy. Little moments with him resonate the most, where you see beneath the sarcastic comments to the type of guy he is, which in the end is just an honest to goodness great guy. Christian is the golden boy, not a bad guy, but as Mr. Popular he's a bit out of Clara's league, although as he is part of Clara's vision, and the reason they moved to Jackson Hole, they are linked together. Plus, Christian has a bit of a secret too that is a game changer for Clara. Watching Clara navigate these relationships is great. How do you balance your purpose (Christian) against your heart (Tucker)?
The book ends on a bit of a cliff hanger, but you still feel like there was a resolution. Instead it leaves you wanting more, wanting to know what happens next for Clara and Company.
Here we go with the real ramblings... get ready...
For those who know me, you know that my biggest pet peeve in the world is poor research. Within that peeve, there is a one bit that really, really kills me, and that's when an author sets her book in a real town and then proceeds to make the town so unrecognizable that it ruins the whole story. That destorys a book for me, so when I realized that Clara and her family were moving to Jackson Hole, WY I was excited and nervous. Would she do it right, or would the story self-destruct before my eyes? Authors, take note. This is how you do it. I go to Wyoming every other summer or so and no matter where I roam, Jackson Hole has become my home (point's if you know what song that's from). If I'm not in Wyoming often enough I say that I get the itch. I miss the mountains, the way the air smells when it's about to rain, the way the sun reflects off the Snake River. I miss the people and the wildlife and I miss the way I feel when I'm there. It's a hard thing to explain, but that area is part of me and to see it in this book was wonderful. 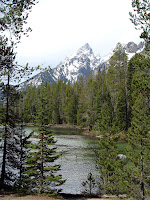 Hand included everything that I love. From the touristy pictures under the antler arches, to the Million Dollar Cowboy Bar, The Pink Garter, Mountain High Pizza Pie, Snow King and even Crazy River Rafting (the actual rafting company is Mad River Rafting if you are wondering, but I've always been more a Barker-Ewing girl myself, so I'll let that one slide). Everything is spot on. Even when they leave town it's perfect. Flying over Jenny Lake (how fabulous would it be to leap off from Cascade Canyon and just glide?), to sunrise over the mountains and the view from Teton Pass. Even the tiny snippet in Yellowstone was there. If Hand had included a scene from my personal favorite Teton spot, Schwabacher's Landing, I wouldn't have been able to contain myself (I'm not certain I'm containing myself now...). 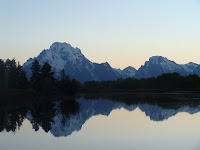 In short, I loved this book not only or the story, but because it felt like home. There was a familiarity that made me connect with the characters that much more. I'm not a religious person (to say the least) and angel books tend to put me off because they sometimes come off as preachy. Hand never does, this is simply a great story, with great characters, in a great setting. Plus, if you've ever stood in the misty morning, bundled in layers of clothes and watched the sunrise reflect off the Tetons, it's hard to deny you may have found yourself in heaven. So, Bravo Cynthia Hand, you accomplished what so many fail at, you made a world I know and love come to life on the page and next time I'm there I won't be able to resist looking upwards in hopes of seeing an angel glide by.
Posted by Kate E. at 8:13 PM