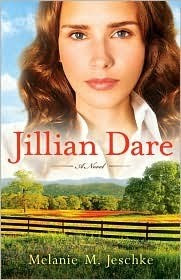 Jillian Dare
By: Melanie Jeschke
http://www.inklingsauthor.com/
Jillian Dare leaves her Shenandoah Valley foster home behind and strikes out on her own as a nanny at a large country estate in northern Virginia. She is delighted with the beauty of her new home, the affection of her young charge Cadence Remington, and the opportunity for frequent travel to the Remington castle in England. She is less certain about her feelings for her handsome but moody employer, Ethan. In spite of herself, Jillian realizes she is falling for her boss. But how can a humble girl ever hope to win a wealthy man of the world? And what dark secrets from the past is he hiding? This contemporary story, inspired by the well-loved classic Jane Eyre, will capture readers' hearts.

**********************************
This modern retelling of Jane Eyre is a fun book. Jeschke take alot of what is great about Jane Eyre and pulling it into the present, which makes for a quick and easy read. For those of you who have read Eyre, the basic plot remains the same (although slightly condensed). A young girl, Jillian, raised by an adoptive family takes a job as a Nanny for a weathly and charming man, Ethan Remington. Against considerable odds they fall in love and plan to wed, but as is sometimes the case, there is unresolved business in the form of an ex. Of course, tragedy brings Jillian and Ethan back together in the end, where they find happiness despite it all. That is the really condensed version, but of course there is much more.

I really liked Jillian. I thought she was a plucky character, overcoming alot of hardships to be a really self-sufficient, strong girl. I liked seeing her go from slightly insecure at the outset of her job as a nanny to Cadence Remington, to a woman who could not only take care of herself, but also those who she loved.

I thought Ethan Remington was a decent character as well, although I admit to wanting to know more about him. We see him from Jillian's perspective and she makes the leap from crush to love pretty quickly, and I wish we had gotten a little more insight into what was so caprivating about him. That being said, what we got, I liked. He was equal parts mysterious and charming, and I particularly liked the sections that had him with his daughter.

Jillian's adoptive family, the Brooke's, play a part as well, especially when Jillian moves back in with some of the kids her age. John Brooke's is in the role of Jillian's would be suitor, seeing her as a perfect companion to join him on his missionary work, and as a wife. Her relationship with him serves to show her that you have to follow your heart, even if it sometimes finds itself at odds with you mind.

This book has got a little bit of something for everyone, mystery, romance and action. Personally, I enjoyed this book alot. If you are a fan of Eyre, or if you want a break from the more supernatural young adult fare that's popular right now, this is a great option.

Jillian Dare is one of EFG's and TwilightMom's May books, so check back really soon for contest information and to see when we've set up a chat with the author for.