My Ramblings on Bull Rider by Suzanne Morgan Williams 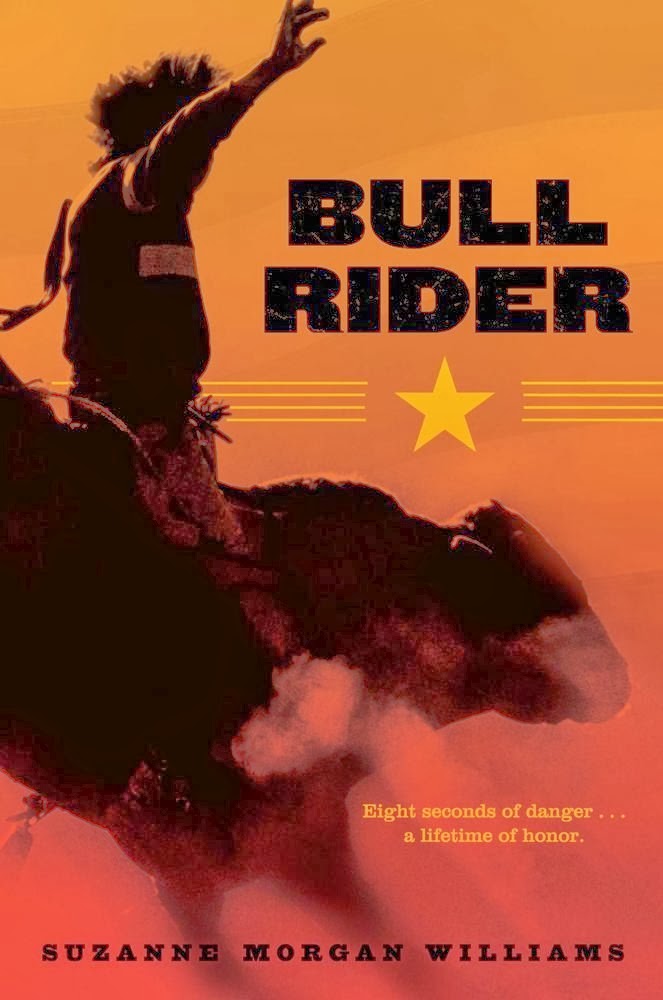 Summary:
All it takes is eight seconds . . .

Cam O'Mara, grandson and younger brother of bull-riding champions, is not interested in partaking in the family sport. Cam is a skateboarder, and perfecting his tricks—frontside flips, 360s—means everything until his older brother, Ben, comes home from Iraq, paralyzed from a brain injury. What would make a skateboarder take a different kind of ride? And what would get him on a monstrosity of a bull named Ugly? If Cam can stay on for the requisite eight seconds, could the $15,000 prize bring hope and a future for his big brother?

My Ramblings:
Lately I've been trying to work my way through my TBR pile. I have books on there that I picked up at NCTE 3 years ago and that, for one reason or another, I just never picked up. This is one of those books. If you know me at all you would know that this book should have been picked up and read immediately. A book about bull riders? Totally up my alley.  Still, it sat, just waiting to be read for years. I finally picked it up this weekend and read the whole thing in one sitting. It is such a great book.

At the center of the story is Cam, a kid who is a bit of on outcast in his own family. he lives and works on his family ranch and he comes from a long line of championship bull riders, but riding bulls has never been Cam's thing. It was really his brother Ben who shone in the arena. Cam preferred to spend his time riding his skateboard. Until Cam's world falls apart. Ben is injured in Iraq and suddenly Cam's life is spiraling out of control. Ben can no longer take care of himself and he definitely can't ride bulls anymore. On a whim Cam decides to ride a bull and he discovers that he has some of that innate talent as well. He's hooked on riding not only for the adrenaline rush, but for how it makes him feel connected to his brother. So he takes on a challenge to ride the baddest bull around, Ugly. If he can do it he'll be able to show Ben that anything is possible, and also win enough money to get Ben back in game, this time as a breeder instead of a rider.

Watching Cam navigate the massive changes in his life is really interesting. You can see the struggle as he deals with being the one left behind. First when Ben goes to war and then again when everyone has to take care of Ben once he's home. Seeing him come into his own and help Ben find his way as well was great.

This is a great book, especially for kids who are dealing with family members who are deployed or who have returned and are injured. This is a very honest look at how life changes and how you can get through it. I'm very glad that I finally picked this one up!