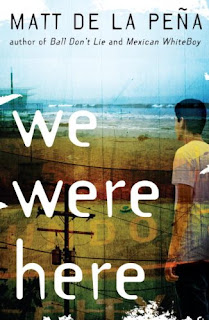 We Were Here
By : Matt de la Pena
www.mattdelapena.com

The story of one boy and his journey to find himself.

When it happened, Miguel was sent to Juvi. The judge gave him a year in a group home—said he had to write in a journal so some counselor could try to figure out how he thinks. The judge had no idea that he actually did Miguel a favor. Ever since it happened, his mom can’t even look at him in the face. Any home besides his would be a better place to live.

But Miguel didn’t bet on meeting Rondell or Mong or on any of what happened after they broke out. He only thought about Mexico and getting to the border to where he could start over. Forget his mom. Forget his brother. Forget himself.

Life usually doesn’t work out how you think it will, though. And most of the time, running away is the quickest path right back to what you’re running from.
********************************************
I loved this book. I picked it up ahead of the Rochester Teen Book Fest (May 15th) as de la Pena is one of the authors attending and I'm glad I chose this book. This book is written in something close to journal form, with Miguel having to fill in a journal as part of his court mandated punishment for the crime he comitted. We don't find out the exact nature of his crime until the end of the book, which I really liked, because it allowed me to really get to know Miguel without having a preconcieved notion about him related to his crime.

Miguel is a great character. He find himself a criminal, one who's actions, albiet accidental, have left him an outcast from his family and in a group home for troubled boys. Even there he doesn't fit in. He just reads books, and tries to keep to himself and finish his time. When Mong, a fellow group homer who Miguel has a negative relationship to asks him to break out with him, Miguel agrees, taking his roommate Rondell with him. The trio, each vastly different from eachother, form an unlikely bond as they try to make it down the coast to Mexico.

Throughout their trip they encounter alot of obstacles. How to get food, how to deal with people prejudices and even how to deal with death. By the time they reach Mexico, they realize that it may not be the right path and have to decide what is the best course.

I really liked this book because it didn't shy away from some really tough issues. It had damaged characters, one with a serious illness, one suffering from the long term effects of his mothers drug use, and one trying to come to grips with a horrific accident. This book never asks us to pity them though, it simply shows us who they are as they try to navigate a world in which they don't quite fit in. I thought every character was well written and in the end I was really proud of the progress they made and the way they turned out. Overall, great book.