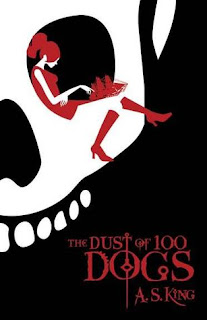 In the late seventeenth century, famed teenage pirate Emer Morrisey was on the cusp of escaping the pirate life with her one true love and unfathomable riches when she was slain and cursed with the dust of one hundred dogs, dooming her to one hundred lives as a dog before returning to a human body -- with her memories intact.

Now she's a contemporary American teenager and all she needs is a shovel and a ride to Jamaica. (from goodreads.com)

*******************************************
This was a great book. This was another one that I grabbed for the book fest and to be honest I chose it on title alone, well that and the fact it had pirates. It just seemed like a completely original concept and that is always fun to see. King handles what could be a really complicated structure in a way that kept it all flowing and organized and it made for an exciting read.

The book follows two stories about the same person- first is Emer, living in Ireland during the time Cromwell invaded, she is pushed out, her family killed and she is sold as a slave/wife by relatives. She escapes to the Caribbean where she becomes a pirate and weilds increadible power on the sea. She finds her lost love and then loses him again. Right about that time she is also cursed with the "dust of 100 dogs" and has to live 100 lives as a dog before she can return as a human. Which is where Saffron comes in. Emer is reborn with all her memories in tact as a contemporary teen in a poor area of Pennsylvania, who just wants to escape back to the Caribbean and find her lost treasure.

Both stories are great and contain a little bit of something for everyone. Neither Emer or Saffron are terribly well off, but both are survivors and increadibly strong characters. There is action and buried treasure, and of course a little romance. I also really appreciated that a ton of research was done on this book and the history of both Ireland and the Caribbean was spot on. Good books tell a phenomenal story, but really great books teach you something as well, and I think this book accomplished that feat. Not only did you get an adventure, but you also learned a bit about Ireland, what life was like for those who were poor and pushed out, as well as what pirateering was like at that time.

I also really enjoyed the idea that not only was Emer hit with the dust of 100 dogs, but so was everyone else in her immediate vacinity at the time. So there were some great interconnecting storylines and plots that tied it all together in the end.

I'd say that this is one book to grab and read. It's exciting and fun and is genuinely a really great read.

On another side note- I also had the pleasure of meeting A.S. King at the book fest this past weekend and she is amazing. She is increadibly nice and funny and gave a great presentation with Lisa McMann and Robin Brande about High School Humiliation and how all those terrible moments can make for wonderful and realistic books. She also graciously agreed to an interview, which will be psoted on Eve's Fan Garden in the next few days!