My Ramblings on Wolf Sirens by Tina Smith 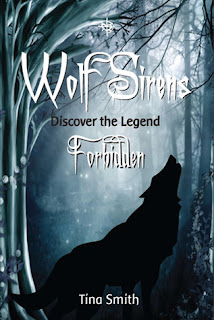 Summary:
When Lila unwillingly moves to the country town of Shade, she can’t imagine the life-altering events that lie in wait for her. Shade has a curfew and has always been surrounded by myths. A central feature of the town is its famous statue of Artemis, Goddess of the Hunt, whose spirit is said to protect the innocent.

Lila falls in with a group of intriguing teenagers with luminescent eyes and soon she is drawn into the shadowlands of fantasy and reality, where destiny collides.

A mysterious local girl, Cresida, warns her to stay away, but Lila is drawn to them like a moth to a flame.

Cresida knows their fatal secret and she is honour-bound to protect those who are endangered. But she underestimates Lila’s passion for the mysterious and charismatic clan of youths. Lila begins to feel a call she cannot ignore. Yet her heart is filled with vulnerable desires that begin to turn the underworld upside down, for both hunter and hunted, as she learns they have been waiting for her…

Inspired by the legend of the mythical femme fatale, Wolf Sirens is an intimate tale of unrequited and forbidden love in the underworld, a masterpiece of romance fantasy. (from goodreads)

My Ramblings:
So did it live up to the summary? Yes and no. I loved Smith’s version of the werewolf and how she tied in some ancient mythology to the origin story. I also really liked the main characters, especially Lila and Cressida. Both are trying to figure out who they really are and how they fit into the world of Shade. Shade itself is a pretty interesting little town, and I liked how Smith wove in the history of the other wolves and how and why they came to Shade.

The story was fast paced and for the most part flowed really well. However, there were a few things that felt almost too rushed for my liking. The ending, for me, was too abrupt. I had pretty much figured out what Lila was before it was revealed in the story, but I thought her transition into her new role was too easy. There wasn’t quite enough push back from her and there also wasn’t enough time spent on what her new role would do to the relationships she had built. And then the book just kind of ended. It also fell trap to my most hated type of ending. The epilogue. This was actually a really well written epilogue, but why was it an epilogue? Why wasn’t it just the last chapter? It really through me off and made the book end on kind of a down note.

There are two more books in the series that are out, and while I enjoyed the story, I'm not really drawn to see what will happen next. They, to me are a plan b type of book. In other words, I'm likely to buy them for the iPad and then when I find myself in a lull I'll read them, but I'm not rushing out to grab them and devour them right away.
Posted by Kate E. at 8:00 AM