My Ramblings on Spellbinding by Maya Gold 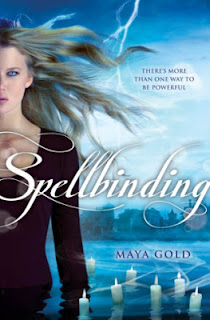 It is during a routine school project that Abby Silva--sixteen and nearly friendless--makes a startling discovery: She is descended from women who were accused of witchcraft back in 1600s Salem. And when Abby visits nearby Salem, strange, inexplicable events start to unfold. Objects move when she wills them to. Candles burst into sudden flame. And an ancient spell book somehow winds up in her possession.

Trying to harness her new found power, Abby concocts a love potion to win over her longtime crush--and exact revenge upon his cruel, bullying girlfriend. But old magic is not to be trifled with. Soon, Abby is thrust headlong into a world of hexes, secrets, and danger. And then there's Rem Anders, the beautiful, mysterious Salem boy who seems to know more about Abby than he first lets on.

A reckoning is coming, and Abby will have to make sense of her history--and her heart--before she can face the powerful truth.

It's been awhile since I've had the time to sit and read a book. When I finally had some free time I checked what was next on my TBR pile and picked up this book. I was instantly hooked. Gold did a great job at connecting her story to traditional Salem Witch Trial lore and it was fun to read. I so wanted to love this book from start to finish, but there a few little things that let me down in the end.

Gold creates a great main character in Abby. She's relate able and it was very easy to get attached to her. I think everyone can remember being in High School and feeling like the outcast. In Abby's case she just feels invisible, and not just at school, but at home too. It's just her, her brother and her father and her brother and father are thick as thieves, they even look alike. Abby is kind of adrift and is not only dealing with normal teenage stuff, but also with recurring nightmares. I very quickly was hooked on Abby's story, especially as we began to learn not only more about Abby and her family history, but also the history of Salem and the witch trials.

Gold also gives us some great secondary characters.  Despite often feeling alone, Abby does have a pretty decent support system. Her brother and father are maybe not interested in what she has going on, but neither are they absentee or abusive. She has two good friends in Rachel and Kate, who, despite not always agree with her actions, stay relatively firmly in Abby's corner. Of course, since we are talking YA here, there are boys. Two pretty great boys as a matter of fact, in Travis and Rem. Travis is the schools golden boy, and he's also been an acquaintance of Abby's for years. They aren't really friends, but they are friendly, and Abby has a major crush on him. Rem is the new guy, the one she feels a mysterious pull towards. In the end it all works out as it should, and I really enjoyed reading this love triangle.

The best part of this story was the magic. Who doesn't want to believe in magic, to believe that they might have a little bit of power in them? I really, really enjoyed watching Abby figure out who she is and what she is capable of. I loved seeing her try to find that balance between what she can do and what she should do. I especially liked watching her as realize that she has the power to decide, to become the person she wants to be. I thought that Gold did a phenomenal job weaving the lore and magic into present day Salem. She did a great job making it believable that these things can be there, brewing just underneath the surface, and no one is the wiser.

Gold has a great line in the book that I think pretty much says it all in terms of why I personally love books like this, that mesh reality with magic and tie in history. Gold says "How much goes on in the world that not written in the History books, that we can't understand" That's pretty much it for me. I love history, but part of the fun is that you know that not everything is there in black and white. That there is always the potential for new information to surface that would flip everything we know on it's head. Usually it's something small, like the person who wrote a book that was critical of the Union Soldiers during the Civil War is actually a descendant of some Confederate General, which renders everything he writes as biased (I made that example up by the way). Still, there is always the chance for something bigger. What if there are witches, not just those that practice Wicca, or dabble in spells and incantations, but actually familial lines that have been honing their craft, one that was genetically part of their makeup, for hundreds of years? What if they had a hand in some of the biggest events in history? What if they live and work with you and have an impact on seemingly mundane events everyday? I find that stuff fascinating, and I think Gold did a fantastic job in writing a story that is at once totally outrageous and completely believable.

What was the bad then? Well, it really was a few little things. First, there were the mean girls and their treatment of Abby. It was ridiculous the level of bullying that went on. Not that this doesn't happen in real life, it does. What irked me was that it wasn't dealt with. Yes, Abby uses her new found power to challenge the mean girls, but at no point does anyone ever mention how not okay their behavior is. She never tells a teacher or parent and the fact that her friends don't don't mention it leads me to believe that their behavior is supposed to be a common one. It bugged me the entire time. The second thing that got me was that there was so much build up in this book. I felt like I was really invested in a lot of the characters and I was looking forward to a big showdown of some sort. There was a showdown of sorts, but, for me, it all wrapped up too quickly and too nicely. I like where everyone ended up, I just wish there was more to how they got there. To be honest I felt a little gipped. I tore through this book in about 4 hours and I was so excited for the final action and then it was just kind of over. The kicker is that I even liked how Abby made her choice and the actions she took, but it felt too neat and tidy for my liking. It was a bit of a let down after such an exciting ride.

So where does that leave me? Well, it leaves me with a very good book that could have been great. I struggle for the exact words, but I can sum it up by saying that I just wanted more. Still, I wouldn't write this book off. If your like me and you love History and you love supernatural tones then I'd pick this one up and give it a test drive. You might find that it's a perfect fit!
Posted by Kate E. at 2:06 PM