My Ramblings on We're Not Leaving by Benjamin J. Luft, M.D. 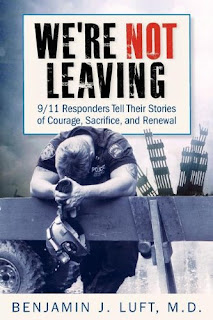 "We're Not Leaving" is a compilation of powerful first-person narratives told from the vantage point of World Trade Center disaster workers-police officers, firefighters, construction workers, and other volunteers at the site.
While the effects of 9/11 on these everyday heroes and heroines are indelible, and in some cases have been devastating, at the heart of their deeply personal stories-their harrowing escapes from the falling Towers, the egregious environment they worked in for months, the alarming health effects they continue to deal with-is their witness to their personal strength and renewal in the ten years since.
These stories, shared by ordinary people who responded to disaster and devastation in extraordinary ways, remind us of America's strength and inspire us to recognize and ultimately believe in our shared values of courage, duty, patriotism, self-sacrifice, and devotion, which guide us in dark times. (from goodreads.com)
My Ramblings:
I think it's fair to say that most of us remember where we were when we first heard about the events of 9/11. I was in a morning class at college, Biology, half asleep in the back of the room when someone got a text from someone. No seemed to take it really think anything big was happening, class continued and we all walked back to the dorms. Then, with the TV on and calls flooding in from family and friends, it all began to sink in. A lot of my friends were from the Northeast. We all  knew people in the city. We were 1000+ miles away from NYC and we were trying to track down loved ones and friends. Thankfully, everyone we knew was not in the area at the time of the attack. Not everyone had that experience, not everyone was as lucky. This book tells the stories of those who were there during the aftermath.
I won't lie, this is a tough book to read. I had to set it down several times and take a break. I imagine it is even harder on those who were in NYC on that day or who lost loved ones. A range of people share their stories in this book, everyone from firefighters and EMT's who were at Ground Zero and survived to those who came later to offer their support and help. They don't pull punches and some of the descriptions of what they saw are hard to take in. Still, I think we have to. These are the people who ran towards danger to help those who needed them. The reality of the situation should not be sugar coated. The honesty of the contributors is part of what makes this book so powerful. The fact that many of these people, who did what they could to save others, are now suffering from various medical issues, both physical and emotional is a testament to the cost of their actions in the days that followed the attacks.
This is a great book to read if you want a different, more personal, perspective on the events of 9/11 and the days, weeks and month following. There will be moments you want to stop reading, but it's important to finish.  I think we've all heard people say that "we will never forget", this book provides one way to remember what happened and the sacrifices that were made by those who were there.
Posted by Kate E. at 2:12 PM