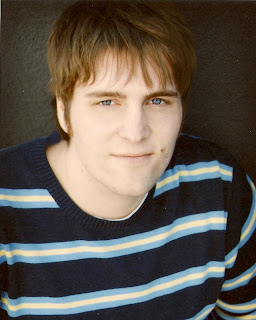 Earlier this week I reviewed Chris Rylander's The Fourth Stall, now I'm happy to share an interview I was able to do with him! This was a super fun book and I'd recommend going and picking it up if you get a chance!

A Reader's Ramblings: Can you tell us a bit about The Fourth Stall and how the story came about?
Chris Rylander: Well, when I first started writing, I actually was writing books for adults. And then I queried an agent who suggested that I might have a good “voice” for writing YA or MG. And so that’s how I first was pointed toward children’s literature. As for THE FOURTH STALL itself, there really was no cool story or moment or dream or anything like that. Essentially, it was me sitting down and asking two questions: 1) What cool and funny and action-packed book did I never get to read as a kid? 2) What’s something adult, that I can put a kid-friendly spin on that lends itself well to the school structure? And so I came up with this idea to do like a noirish organized crime type thing. Well, that’s what I told my cat to write about, anyway. I mean, I didn’t actually do the writing myself. My cat is much better at that part of it, I’m more like the idea guy.
ARR: Mac run’s a pretty tight business, and so does rival Staples, where did the idea for the competing Middle School Mafia families come from?
CR: Definitely The Godfather and other such organized crime stories. The idea of rival mob families and crime bosses I thought could be transitioned to school fairly well and that it created a lot of opportunities for humor and action and mystery.
ARR: Your website has a lot of great drawings, did you ever consider adding drawings to The Fourth Stall?
CR: I actually never did think of it that way. I always considered it strictly a novel. I mean, I don’t hate the idea, but it never really occurred to me when I was writing it. That said, I’m not opposed to someday maybe getting to illustrate my own book. The only problem will be that I can only draw sharks and stick men who meet violent ends. So I’m not sure if that will fly as a kids book, even as awesome as it sounds to me.
ARR: Books for tween and teen girls seem to rule the marketplace sometimes, did you always want to write for Middle Grade boys?
CR: Not really, it never was a conscientious decision that I made. I just wrote what appealed to me and sounded fun to me. And, being a guy with the mindset of a 13 year old, I think it was only natural that the end result can be considered a “boy book.” That said, I’m pretty happy to say that a lot of middle grade girls have told me they loved the book, too.
ARR: The Fourth Stall ends with a bit of a teaser about a girl- will we get to hear about how this girl with “…damp hair and a swagger…” sometime in the future?
CR: Actually, yes. There will be a sequel coming out in February 2012. It picks up pretty closely after the first one ends, so you’ll definitely get to meet that girl a lot better in part two.
ARR: If Mac could give boys advice about dealing with a bully like Staples, what would he say?
CR: It would be to not put up with it! If you have a problem, then solve it! But he’d also say to be smart about it. I mean, if some giant kid who weighs 270 pounds of muscle is bullying you, he wouldn’t recommend going up to the kid and starting a fight. There are countless possible ways to solve a bully problem, or any problem for that matter, and that’s why Mac is so good at what he does. He finds the best ways to solve those problems, instead of always the easiest or most obvious.
ARR: Do you have any upcoming books or events you can tell us about?
CR: The only upcoming book for now is the THE FOURTH STALL sequel sometime next year. As for events, I will be speaking at the North Dakota State Reading Conference in Fargo, ND, April 14-16. Also, I serve as the Regional Advisor for SCBWI Dakotas, and we’ll be hosting our annual spring conference in Sioux Falls on May 14, 2011. We have some great speakers lined up for that this year.
Posted by Kate E. at 8:06 AM