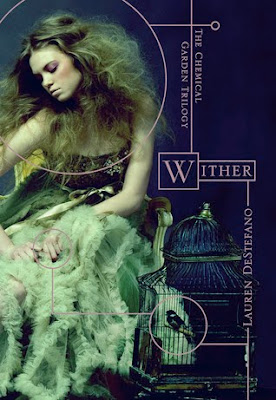 Summary:
What if you knew exactly when you would die?

When sixteen-year-old Rhine Ellery is taken by the Gatherers to become a bride, she enters a world of wealth and privilege. Despite her husband Linden’s genuine love for her, and a tenuous trust among her sister wives, Rhine has one purpose: to escape—to find her twin brother and go home.

But Rhine has more to contend with than losing her freedom. Linden’s eccentric father is bent on finding an antidote to the genetic virus that is getting closer to taking his son, even if it means collecting corpses in order to test his experiments. With the help of Gabriel, a servant Rhine is growing dangerously attracted to, Rhine attempts to break free, in the limted time she has left. (from goodreads.com)

Review:
This was a really great book that stuck with me long after I set it down. I read it about a month ago and I’m still thinking about certain aspects of the story.

At the heart of the story is Rhine, who lives with her brother day to day, trying to stay alive in a dangerous world. They are hoping for a cure before their inevitable deaths, at 20 for Rhine and 25 for her brother. When Rhine is kidnapped and forced to marry Linden, she finds herself trying to not only survive, but break free and get home. With her are her two sister-wives who have different feelings on their fate, both with Linden and in the world.

I really liked Rhine as a character. She took the hand that was dealt to her and did whatever she had to do to stay true to herself. For her there was no other option, she has to break out and get home, even if home is hundreds of miles away. Every step she takes while with Linden in towards release. It was interesting to see her try to manipulate her way out, even as Linden’s father is watching her every move and countering it however he can. In fact Linden’s father may be the most dangerous thing she faces.

I also really enjoyed the relationship between not only Rhine and Gabriel, her partner in crime, but the relationships she built with her sister-wives as well as Linden. It was easy to see that everyone involved was a victim of circumstance. Linden, although he is participating in a polygamous marraige with brides that have been kidnapped, is not, at heart, a bad guy. He only knows life in his house, on his compound, and with the information his father has given him. He doesn’t understand what life is like outside, and he doens’t even really seem to understand how his brides came to be with him. He thinks they are all orphans or alone and that in exchange for marraige they get a better life. He doesn’t realize that not only is that not true for them all, but that those that were rejected by his father met a far worse fate.

The only thing that really kept throwing me of was the term “sister-wife”. With the TV show of the same name out now I kept thinking of the promos I’ve seen of that. It’s just poor timing for DeStefano, as she said in a tweet (which I can’t find, so I will paraphrase) that she was using the term in this book long before the TV show made its debut. That’s such a small issue though, that aside from the fact that it makes me laugh, it’s almost not worth mentioning.

Without giving away the end, I will say that I’m very interested in seeing where Rhine’s story goes from here and I hope we have not seen the last of some of the characters even as they are moving farther away from Rhine.

***Review originally posted to Eve's Fan Garden. If you want to chat about Wither and the series it is a part of, head on over the the Eve's Fan Garden forums! ***
Posted by Kate E. at 11:44 AM